For this one, I was considering that several faces are introduced together, with a clear border (Not processed with layers of each image on top of each other). During the work process, my perception of each face made me think more about it because I had to paint a part of an overall image in each face, which is an unpredictable condition for reaching the version. Provided the final. As the process developed, the personalities of the piece came out of each other. Just as one character expresses more than the other at a certain moment and this problem, in my opinion, deals with topics such as personality conflict and also the contradiction of space-time and lastly named this work as “Paradox.” 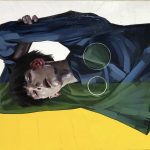